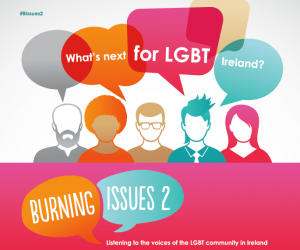 Burning Issues 2
In 2015, after years of activism, we achieved marriage equality and gender recognition.  Following these momentous gains, “what’s next for LGBT Ireland and what’s important to YOU”?

Burning Issues 2 – largest consultation of the LGBT community in Ireland

Olivia McEvoy, Chair of the National LGBT Federation, stated that:

“We have always known that recent legislative changes are only a platform for the culture we aspire to, where diversity is really championed and celebrated and where people can live authentic lives in dignity as their true selves.

Burning Issues 2 now makes it crystal clear that we still have a long journey to travel before we end sexual and gender oppression in Ireland. While a number of additional specific and necessary legislative changes are mooted in the report, the required cultural shift will only be realised when the core principle of promoting sexuality and gender acceptance underpins all state policy and LGBT inclusion and equality become mainstream in all public service provision across education, health, parental support and social services.

Moreover, it is particularly apparent that those on the margins need targeted support, especially transgender people, bisexuals and those who are LGBT and older, younger and living rurally”.