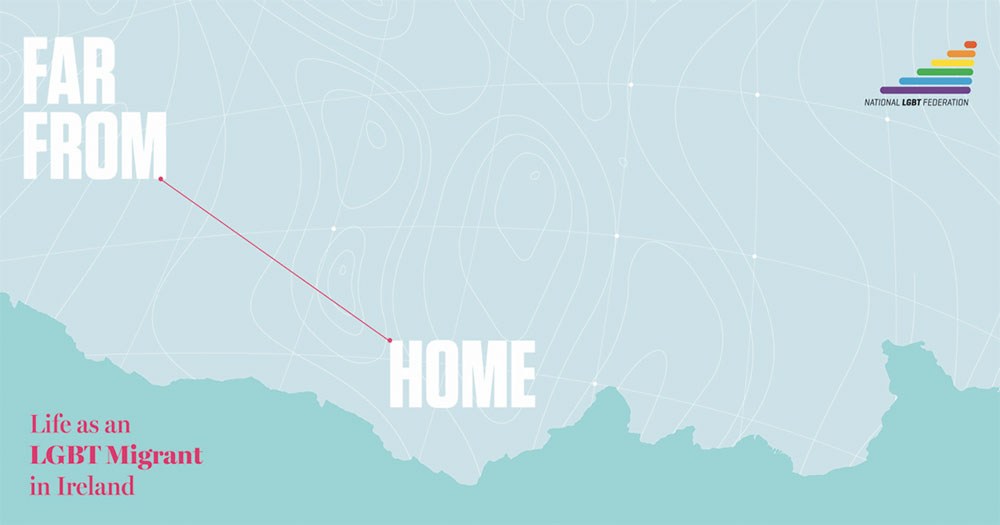 54% of respondents also felt they were excluded from Irish society and up to 40% said they had experienced homophobic abuse.

Participants also called for an end to the current system of Direct Provision in Ireland, with some describing it as “immoral”.

The findings are published in a new report “Far from Home: Life as an LGBT Migrant in Ireland” launched by the NXF (Thursday, November 8th) at the Science Gallery, Dublin.

The report has made a number of recommendations to policy makers including a need to facilitate greater access to mental health services for LGBT migrants; LGBT cultural competency training for all public service employees; an end to the system of Direct Provision and a review of the asylum application process, specifically in the context of how applications relating to sexual orientation and gender are handled.

Furthermore, calls were made for the introduction of effective hate crime legislation.

Commenting on the research report, Dr Chris Noone said:

“This research clearly shows that while many immigrants who are members of our LGBT community find Ireland a welcoming place to come for work, study and greater acceptance of LGBT people, many experience stress from multiple sources that most of us never have to deal with.
This includes racism in public spaces, and to a lesser extent, LGBT spaces, homophobia from Irish people and their fellow migrants, and social isolation. These experiences may account for the worryingly negative reports regarding health and mental health in this study.”

“LGBT people living in Direct Provision are the most likely to encounter such stressful experiences and therefore need the most support. Actions need to be taken to protect members of the LGBT community who are living in Direct Provision from isolation and homophobia. These include guaranteeing that LGBT people are accommodated in areas where they can access LGBT-specific services, that they are housed in accordance with their gender identity and that they are kept safe.”

● 48% of respondents were from EU countries, the majority coming from the UK, Poland, France, Italy and Spain. Over a fifth were from outside the EU, mainly Brazil. The majority of respondents have lived here for five years or more.
● The most common reasons for migrants coming to Ireland were to find work, to study and to experience greater acceptance as a member of the LGBT community.
● For many, seeking greater acceptance also meant escaping serious risks to their safety and lives.
● Almost three-quarters of those surveyed rated their physical health negatively.
● Over half of those surveyed (57%) rated their mental health negatively.
● Many LGBT migrants are living in rural Ireland where there are currently no LGBT community resources available to them.
● 66% of participants indicated they have felt treated with less respect in public spaces because of their race, ethnicity or migrant status.
● Participants felt the system of processing LGBT asylum seekers needed to be radically overhauled.
● Calls were also made for improved access to healthcare and housing, and better channels of information about LGBT services.
● There were concerns expressed about the lack of secularisation in Irish society and the quality of sex education available in schools.
-Ends-

About the National, Gay and Lesbian Federation (NXF)
Established in 1979, the NXF is the oldest lesbian, gay, bisexual and transgender (LGBT) non-governmental organisation in Ireland. The NXF publishes Gay Community News (GCN), campaigns for the equal rights of, and to combat discrimination against, LGBT people in Ireland and internationally.

Dr Chris Noone is a lecturer at the School of Psychology at NUI, Galway and has contributed to research on a wide range of topics broadly related to health, wellbeing and cognition. Dr Noone is Chair of the Research Subcommittee of the National LGBT Federation.

Dr Brian Keogh is an Assistant Professor in Mental Health Nursing at the School of Nursing and Midwifery, Trinity College Dublin (TCD). His research work has centred on stigma, social inclusion and mental health recovery. Dr Keogh is a member of the Research Subcommittee of the National LGBT Federation.

Dr Conor Buggy is an Assistant Professor in Occupational and Environmental Studies at the School of Public Health, Physiotherapy and Sports Science, University College Dublin (UCD). Dr Buggy’s research work lies in evaluating the impact education and training can have on workplaces, organisations and society. Dr Buggy is a member of the Research Subcommittee of the National LGBT Federation.

Far From Home – Life as an LGBT Migrant in Ireland

Far From Home: Life as an LGBT Migrant in Ireland” was funded by the Community Foundation for Ireland (CFI).